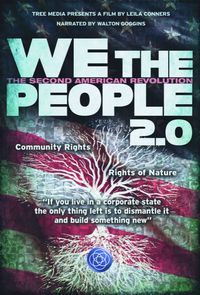 With the premise that the legal system in the United States makes sustainability illegal, this film demonstrates how people across the country fight against large corporations for a law that protects the environment and local communities.

We The People 2.0. The Second American Revolution

American citizens who are normally marginalized, forgotten and left to fend against toxic dumps and other violations, come to understand that the only way to survive is to frontally challenge the oligarchy that has destroyed democracy in the United States.

“If you live in a corporate state the only thing left is to dismantle it and build something new” says one of the interviewees in the film.

Directed by Leila Conners and narrated by Walton Goggins, this is defintelety a documentary to watch if you think something revolutionary must be done to reverse the natural and human damage caused by today's civilization.