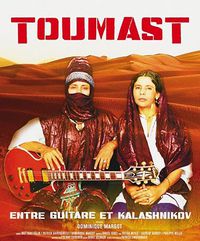 TOUMAST – GUITARS AND KALASHNIKOVS retraces a part of recent history of the Tuaregs. Theirs is a fragmented history made of suffering, wandering, revolt and injustice - but also of travel, comfort and hope. Moussa Ag Keyna, ex-rebel and musician, guides us on these chance and complex trajectories.

"Toumast", the emancipating melodies of the Sahara

In Toumast, Guitars and Kalashnikovs,  french director Dominic Margot follows the itinerant music of Moussa Ag Keyna, a musician and ex-rebel Tuaureg who professes with his harmonies the struggle of his people for political independence. The Tuauregs, harassed by the domesticist pretensions of the French settlers and the new Malian state, have tried on several occasions to defend their right to be nomadic and independent in the midst of the great Sahara desert.

Faced with the impossibility of obtaining their freedom militarily, Moussa Ag Keyna plays his guitar to carry the emancipatory message of his own people everywhere he goes. The film uses several of his compositions to spin its images, pieces in which Arab laments are fused with grooves of rock and pop, and whose lyrics offer a convenient contextualization of the historical episodes that are explained in the own director's voice.

The Tuaureg themselves have much to say about their situation in front of the camera. The Tamashek language, the language of the Tuaregs, is spoken on the screen by the protagonists of the struggle and establishes a cultural counterpoint with Margot's native French. Toumast goes beyond a cinematic “mea culpa” of a European filmmaker about the imperialist consequences of her nation, and becomes a sincere as well as subversive point of view on the power of music to reach emancipation in the infinite dimension of words.