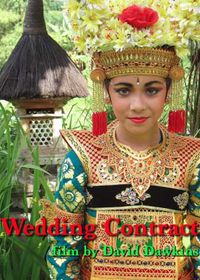 When A Balinese girl is denied permission to marry outside of her clan, there is a traditional solution for the family of the suitor: 1. Draw up a Wedding Contract. 2. Kidnap the Bride. The couple then flees for protection to the suitor's village, and three days of tense negotiations begin. The hostilities often escalate between two neighboring clans, but the negotiations become raucous and bizarre in The Wedding Contract: A Balinese Love Story when the suitor turns out to be a Westerner. This intimate personal narrative follows the relationship of David and Mariyati from the beginning, as it develops from a novelty flirtation to a forbidden romance. The film navigates deep into Balinese culture in a clash of clan against clan, and East against West.

The wedding contract, the adventure for a Balinese love

After ten years of navigating the Missisipi with an itinerant theater company, actor and director David Dawkins arrived in Bali in search for a new life adventure. There he meets Mariyati, a beautiful Balinese woman with whom he quickly forges a furtive romance. With the same video camera used to document his stay, Dawkins records the moment he asks Mariyati to marry him. She accepts happily, but to complete their love union is not an easy matter in this part of the world.

The Wedding Contract is made almost entirely with the footage shot with the video camera that Dawkins seems to carry under his arm everywhere. With it he documents the complex process of getting married with Mariyati after her father denies permission, which is essential in Balinese culture. As a foreigner on the island, Dawkins goes to various clan councilors and begins a laborious process that puts in conflict not only two clans of the community but also the conceptions of West and East.

During the course of Dawkins's quest to confirm his union with Mariyati, the film becomes a window to discover Balinese culture and consolidates as an intimate narrative about power that emanates from love in its more intercultural consequences.