The Train to Moscow 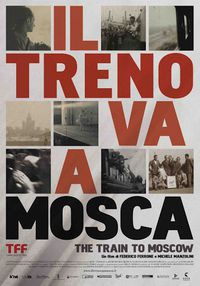 The Train to Moscow chronicles the end of an era and the end of a dream through the eyes of Sauro Ravaglia, an amateur film-maker, barber and communist. Sauro and his friends dream of a world of peace, brotherhood, and equality: they dream of the Soviet Union. A once in a lifetime opportunity comes their way when they have the chance of attending the World Festival of Socialist Youth in Moscow. Sauro and his friends arm themselves with an 8mm camera to film their great journey. What happens when they come face to face with their utopian dream?

The Train to Moscow, the lost images of the Soviet dream

"To understand why we went to Moscow, you have to know where we come from" Sauro Ravaglia tells us in the first minutes of The Train to Moscow. As a son of peasant parents who suffered the abuse of fascism in Italy, Ravaglia makes a journey to the past and remembers a trip to Moscow in the Soviet era, a land that, in his youth, when he started his barber shop, was seen as a world of justice, dignifying work and freedom.

Armed with his 8mm film camera and in company of friends, Sauro travels to Moscow in search of the communist dream that soon fades away. Stalin is suddenly not as tall as they say in the Italian branch of the Soviet radio station in Italy, nor is the economic conditions of that country as good as his communist comrades had told him. Sauro's journey passes before our eyes through those old images, full of nostalgia and the rusticity proper of the film acetate only to take us in a hypnotizing exploration of human aspirations in contradiction with reality.