The Story of the Pig 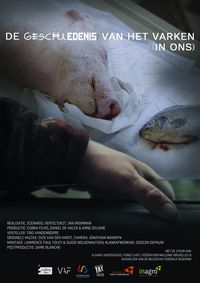 A curious introspective look at the history of the pig, which, in the hands of director Jan Vromman, is the story of the human being and his unequal relationship with animals.

The story of the pig (Within Us)

The narrator of this intelligent and funny documentary is the pig that is inside every human being.

Yes, although we hear a hoarse voice coming from a human throat, the point of view of the film focuses on the experience in the life of a pig, which will be no other than a life crossed by the habits of people.

This curious look at the mind of an animal that has marked the lives of many people since men and women eat, leads to a revealing essay on our relationship with animals.

The myths and rituals, the symbolism and historical significance of the pig become raw material of this film where, in the end, we know more about ourselves than about our friend of curly tail.