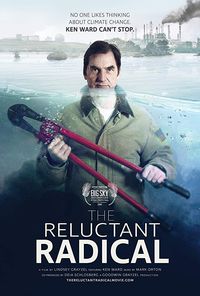 What happens if one crime is committed to prevent another? This documentary shows us how environmentalist Ken Ward is willing to break the law to protect the nature from climate change.

The Reluctant Radical. Environmentalism to the extreme

This documentary follows activist Ken Ward as he confronts his fears and puts himself in the direct path of the fossil fuel industry to combat climate change.

Ken breaks the law as a last resort, to fulfill what he sees as his personal obligation to future generations. After twenty years leading environmental organizations, Ken became increasingly alarmed by both the scientific evidence of climate change and the repercussions for civilization as we know it.

Ken pushed for a crisis level response from inside environmental organizations. Those efforts failed, and he now embraces direct action civil disobedience as the most effective political tool to deal with catastrophic circumstances.