The Nightingale and the Night. Chavela Vargas sings Lorca 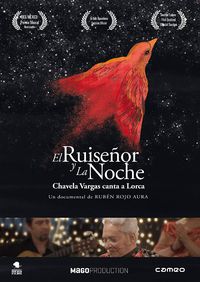 Chavela Vargas and Federico García Lorca are the main characters of this story. Poetry and music are the places of their meetings. Chavela explains when he lived in the same room where Federico García Lorca lived decades ago, was visited by a bird that contained the soul of the Spanish poet.

The Nightingale and the night, Chavela Vargas sings to García Lorca

The Nightingale and the night is the film that gives sound and image to the poetic and timeless link between two great references of the Spanish-speaking culture separated by two eras and a vast sea: Chavela Vargas and Federico García Lorca. She, the renowned Mexican singer of boleros and rancheras. He, the Spanish poet who was killed during the civil war.

The documentary exists due to the curious anecdote of the singer, who, during a tour in Spain, stayed in the same room that Garcia Lorca occupied in the Student Residence of Madrid decades ago. According to Vargas, every evening the soul of Lorca would arrive at her window in the form of a beautiful yellow bird.

The visits of that winged guest inspired the several nights that Vargas spent sleeplessly sitting at a grand piano in one of the halls of the building. Those episodes at the Student Residence in Madrid were the seeds of Chavela Vargas’s last great wish: to dedicate a full year to the homage of her idolized poet.

This documentary directed and written by young Mexican director Rubén Rojo Aura follows the last year of life of Chavela Vargas, who during 2012 sings a careful musical repertoire of Lorca´s poems . The film is a musical journey through the interviews with Chavela Vargas herself, her close friends and connoisseurs.

These are testimonies that are fused with various images and a soundtrack that makes visible the emotion that the Mexican singer lodges for the life and work of the indispensable Spanish poet.