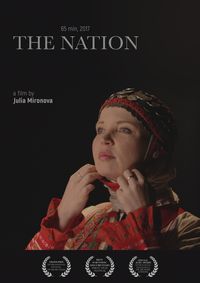 This beautiful documentary portrays a small ethnic community in Udmurtia, Russia, and its unique singing, a precious art that they use as a sign of identity and survival.

The Nation. We exist as long as we sing

The story is about one small ethnic group from the north of Udmurtia, which is trying to maintain its identity.

According to one of the Besermyans, the old noise and excitement was replaced by the dead silence of the village.

"Nobody needs anyone anymore." However, the subtle dance of the female voice is still able to lure a person and a camera inside the house; this is the ability of the voice to be hypnotic, to enter into a trance.

A living language is born in a song, so that Besermyan's song is a method of thinking. As long as it sounds, the nation will live.