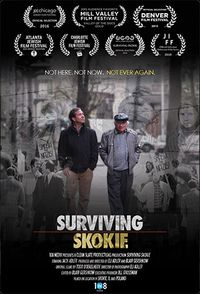 Surviving Skokie, an intensely personal documentary, explores the effects of a late 1970s threatened neo-Nazi march in Skokie, IL on its large Holocaust survivor population. Thousands of survivors comprised 10 percent of this Chicago suburb, including Jack, the father of co-producer, Eli Adler. The relationship between father and son deepens as they return to Poland, where Eli learns more about the extended family that perished during the Shoah. Together they retrace the painful and debilitating journey through two ghettos and two concentration camps. Included are poignant commentaries and archival footage of the historical events spanning 70 years and two continents.

Surviving Skokie, the traces of war in the new world

Jack Adler arrived in the United States escaping from the Nazi invasion that lashed his native Poland back then, however, many of his relatives perished in that horrific anti-Semitic barrage.

What Jack did not expect was that in the village of Skokie, in the outskirts of Chicago, the ghosts of racism would chase him to his new home.

In Surviving Skokie, filmmaker Eli Adler narrates in first person a journey that he and his father make to unearth the past of his family. To do this, he resorts to a varied repertoire of resources, including the thread of his own reflections, interviews, archival material and the poignant images of a revealing trip to Poland.