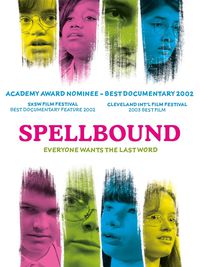 This iconic Oscar-nominated documentary puts us on the front row at the national spelling bee in the United States, where eight teenagers try to spell well and win.

This award-winning documentary (including an Oscar nomination) follows eight teenagers on their quest to win the 1999 National Spelling Bee.

The award is not only a moral recognition of their school readiness, it is a milestone that can change their lives through a major college scholarship.