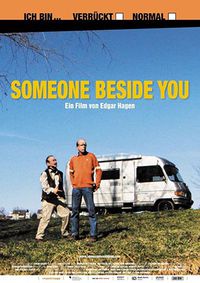 Along with several courageous psychiatrists and their clients, the author sets out to film a documentary road movie that takes him to Switzerland, Europe, and the U.S. On their travels in mobile homes, they explore the depths of the human psyche in search of answers to the question: What is the human mind and how does it behave in psychotic extreme situations?

Someone Besides you, a road trip into the depths of  the human mind

In Someone Besides You, a particular road trip is about to begin for director Edgar Hagen. Along the road that takes him through the regions of Switzerland, his country of origin, but also Europe and other countries, there are convenient stops to talk to a number of psychiatrists and their patients. It is the realization of the search for a response that has intrigued the author: why we lose our lucidity and where does it come from when it is recovered?

The questions to this problem emerge as it is put on the table. The concepts about being sober or the actual answer to the question of when we are really facing a case of psychosis tend to hover over very gaseous limits. The film takes its time to find its shape as it unfolds. From long and general shots framing a discussion between two men, including the fixed camera position to capture a conventional interview, or an aerial shot from a helicopter flying over a Buddhist retreat in the middle of the French province.

There, we find Edward Podvoll, a psychoanalyst and Buddhist lama who tells us "If you have a mind, you can lose it." Like him, other psychiatrists and victims of strong psychotic episodes share in camera their considerations on the functioning of the human mind. The film, premiered at the Locarno Festival in 2007, opens a range of points of view on the subject of mental illness, its causes, effects and possible healings in an unconventional yet lucid cinematographic approach.