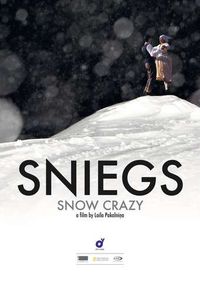 There is a popular Latvian folksong which begins with the phrase “I was singing out high on a mountain”. The irony of it is that according to physical geography there are no mountains in Latvia. So what exactly is the place where the Latvians are “singing out”? It may be safely said that it’s the same place where they are skiing. That’s how we make mountains out of molehills...Snow-covered mountains, to be sure.

If the mountain won't come to Muhammad, it may be because there aren’t any around him.

It was this idea, more o less, what led director Laila Pakalnina to make a witty and hilarious portrait of her native Latvia, focusing on the country's flatness and its thousands of passionate ski fans.

There is a popular Latvian folksong which begins with the phrase “I was singing out high on a mountain”. The irony of it is that technically there are no mountains in Latvia. Pakalnina uses this irony to film the obsession of a country to obtain an elusive geography.

In this 35 minutes long short film, premiered at Vision Du Reel Film Festival, we will see quixotic skiers coming down the roofs of their own homes, skiing on the banisters of the public staircases, being pulled by a motorcycle and jumping over an improvised wooden ramp or trying hard on a recently built artificial snow mountain.

In Snow Crazy these situations are seen as in a carousel. The images are filmed with a sane sarcasm in order to convey a social state of quotidian madness with laudable humanity. The montage and the sound mixing are the key expressive axes to achieve a cinematic symphony that comes from classics like Yoris Ivens's “Rain” or Walter Ruttman's “Berlin, symphony of a city”.