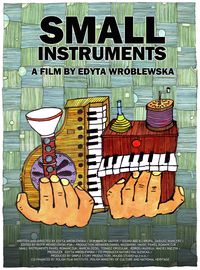 Pawel dedicates his life to finding the ideal sound hidden in everyday objects: wires, old toys, screws. This is a short film about his musical obsession.

Small Instruments. The sounds of the objects

Paweł is a composer and a leader of a music group called: "Small Instruments". He devotes all his life to music obsessively looking for a true sound.

He reveals the magic world of sounds made by various items turned into instruments: screws, wires and old toys. One day he has a dream about a CD placed in a small music box.