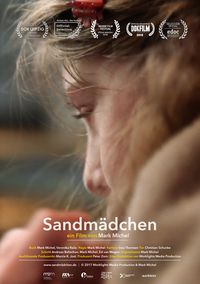 Alternating beautiful animations with the intimacy of customary moments, this film is a journey into the creative world of Veronika Raila, a girl that has lived with Asperger syndrome and physical disabilities since her childhood.

Sandgirl. A universe of sand, music and words

Veronika Raila has lived with Asperger syndrome and physical disabilities since her childhood, using assisted communication to express her thoughts.

In Sandgirl, the young author invites you on a subtle and poetic journey inside the secret, captivating creative world of her heightened imagination, expressed through beautiful sand art work and animation.

Weaved throughout the film is Raila’s shared communication with director and fellow screenwriter Mark Michel, illustrating the love, care and trust shared between Raila and her family, and giving the audience a rare glimpse of her inner world and thoughts.