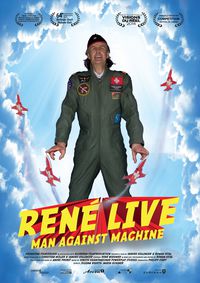 This funny and inspiring film follows the eccentric René Wiedmar, a professional high-speed yodeler, over the course of several years as he attempts to challenge the fastest fighter jet in the world at a grand world-record event with nothing but his yodeling tongue.

René Wiedmer is 55 and a professional high-speed yodeler. His goal is to challenge the fastest fighter jet in the world at a grand world-record event with nothing but his yodeling tongue.

On his search for sponsors he travels the whole of Switzerland and encounters not only pilots, beatboxers, and hobbypsychologists, but also two event-managers who are willing to help him to make the impossible possible.

With his striking enthusiasm and his untiring drive this Don Quijote of high-speed-yodeling fights against the windmills of a world that just won't keep up with his speed.

At the same time, there is a kind of modesty in his positive and heartening verve that gives inspiration and encourages not to give up believing in the impossible.

An unusual superhero, who is sometimes left with nothing but the power of being astonished by oneself.