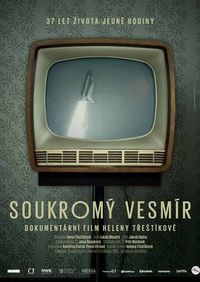 "Private Universe" show not only the life of one ordinary family, but also how the Czech society has changed in last four decades. Who are we, where do we come from and where do we go?

Honza was born in 1974 into the cheerless era of socialism in Czechoslovakia. At that time, his parents Jana and Petr lived in one room in the apartment of Jana's divorced mother and her widowed grandmother. A few years later, the family moved from Prague to Liberec where Petr found a job and a little house for the family. When Honza was born, his father began writing a family chronicle and he has continued to do so for 37 years.

Private Universe, an incredible documentary filmed in the span of 37 years

The year was 1974 in Soviet bloc’s Czechoslovakia when a young filmmaker named Helena Trestiková asked her pregnant friend Jana and her husband Pietr to allow her to capture the birth of their first child.

With the birth of Honza, a project that would span 37 years in the life of a typical Czech family also started. The result is Private Universe.

The first thing that stands out of this documentary is the thoroughness and dedication of its creators. Thanks to a solid friendship, family traditions, hundreds of photographs, Pietr’s hand-written diaries and an absolute discipline and consistency in revisiting the family periodically, Private Universe manages to be a human testament of the creation of a family that began with a young couple and ends with three adult children, two grandchildren and hundreds of memories.

The magic of Private Universe focuses on Honza, who in the space of 90 minutes became a full grown man in front of our eyes. It’s a magical experience perceiving dozens of details captured on camera that will end up forming an indelible part of his personality, like the pacifist message of John Lennon, the Eastern European post-punk of the 80’s and the admiration to space race’s heroes such as Yuri Gagarin. It’s the story of the construction of a human being inspired by his political, social, economic, scientific but above all, family environment.

In parallel, Private Universe is also the story of a country in constant transformation. From the rigidity and camaraderie of the Czechoslovak communist bureaucracy to the inevitable division of the nation into the Czech Republic, the family is growing and aging alongside these events, always with the radio and TV as the main sources of information. The Prague Spring, the invasion of the Warsaw Pact’s armed forces, the Velvet Revolution and the inclusion of the Czech Republic into the European Union, among other historical moments, happen while this family simply live his beautiful ordinary life.

It’s a perfectly framed picture. Horizontally, the history of pop icon Karel Gott, always constant through the years. Vertically, the space exploration. And in the center, a middle-class Czech family living during and after the Cold War.

Private Universe is one of the best testaments to the strength of the family and the feeling of being home. It’s wonderful to see the genius work of director Helena Trestiková and editor Jakub Hejna in selecting, prioritizing and making a coherence narrative to thousands of filmed hours and audiovisual archives, in order to create a simple, long-lived and powerful story.

Intimate, relevant and honest, Private Universe is a unique documentary about the everyday life and the passage of time. The pleasant surprise is that this cinematic piece also has a great personality, a steady pace, dozens of funny moments and a very emotional core to which we all — regardless of our history — will relate.

Watch now this an other great documentaries on GuideDoc