The Prince Of Ostia Bronx 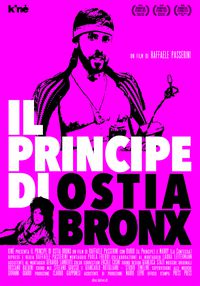 Rejected by society, Dario and Maury decide to move to a gay nudist beach in Roma. Full of brushstrokes of pop, psychedelia and lots of movement, this is their movie.

The Prince Of Ostia Bronx. Failure as a parody

Dario and Maury, two actors rejected from the theatre scene, the academy and from cinema, decide to move to the gay Roman nudist beach of Capocotta.

Here, they set their stage, in a place where people come to feel free and unconstrained by the rules of society.

Following their philosophy of ‘failure as a new form of victory’ they become il Principe (the Prince) and la Contessa (the Countess) of the beach.

In 20 years, they have gathered a little yet loyal audience, staging plays and creating a long repertoire of amateur little movies, where they confess the bitter reality of missing a real Stage, the one “only the so-called gentlemen are allowed to.””

With irreverent tones of Pop, Dance and Folk music, this film celebrates failure as a parody, making anybody willing to watch, a Prince or a Countess of the non-victories.​