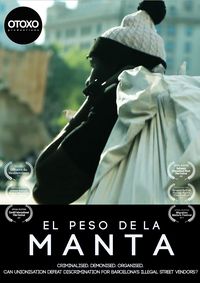 In their struggle to defend their human rights, the African street vendors who work in the streets of Barcelona undertake the challenge of forming a workers' union to achieve their mission.

After crossing the sea during a tortuous journey in search of a better life, an important population of African immigrants who come to Barcelona become street vendors to support their families.

They suffer from discrimination by the authorities, which systematically exercise their repression to enforce their law.

In this documentary we follow Aziz, Lamine and Seni, three African immigrants who undertake the task of creating a union of street vendors in order to defend their human rights.

Without hiding its educational intention, El Peso de la Manta is an important story to help make visible millions of immigrants who try to survive in a Europe that has the great challenge of reinterpreting its responsibility with the current migratory crisis.