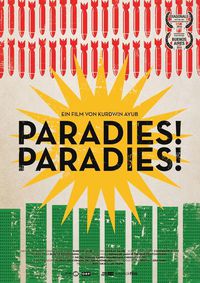 After having been living for over two decades in Austria, a father and his daughter travel to Iraq on a journey of rediscovery and filial love.

Paradise Paradise, The reunion of a father and his daughter with Iraq

In an opening scene, using the camera as a false mirror, Kurdwin Ayub, the director of this documentary, shows the outfits she plans to wear on her trip to Iraq, her only concern being finding the right combination of clothes that can cover her entire body, especially her tattoos, which are forbidden by Islam.

This initial scene concentrates the tone of this intimate portrait, full of humor and family emotion, about the relationship between a daughter and her father during a trip to their country of origin after having lived for more than two decades in Austria.

Between appointments with real estate agents in their search for a residence to buy, encounters with their relatives and even with active soldiers in conflict zones, the experience in this volatile geography will be different for both, revealing cultural and generational dislocations between two characters united by their filial love.