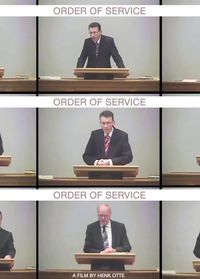 In this documentary, the screen is divided into 9 frames to show us the service of the Reformed Church in Holland in a way we would have never expected.

Order of Service. An experimental film about repetition

Repetition is, in itself, the basic requirement of every ritual.

The director Henk Otte explores this premise by showing us 9 services of the Reformed Church in Holland dividing the screen into 9 equal parts.

The exercise invites us to move our eyes throughout the screen in search of patterns, variants and repetitions that make us reflect on ritual and faith from an aseptic vision that is still human.