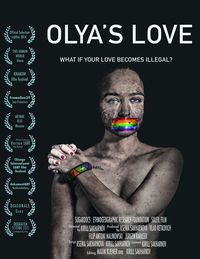 A young Russian woman fights along with the LGBTI community against a law that discriminates homosexuals. But her love relationship with her girlfriend will be put to test by this political commitment.

Olya's Love. What if your love becomes illegal?

This is a film about a lesbian couple living in Russia. Olya is a fighter and an active member of the LGBT-community. But her partner Galiya doesn't want to let politics rule her life.

Their love is strong, and they want to have a baby together. When Russian Duma launches their discriminating laws against homosexuals, Olya starts to fight even stronger.