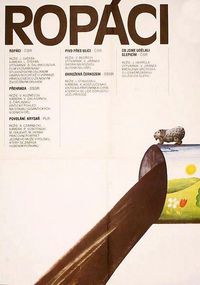 This Oscar-winning fake documentary follows a group of scientists and filmmakers on their quest to find some strange creatures that inhabit toxic waste.

Oil Gobblers. The strange creatures of the industrial wastelands

This short fake documentary - a winner of the Student Academy Award - follows a zoologist and a biochemist as they go out into an oilfield with a cameraman and filmmaker to observe and study the elusive "oil gobblers".