New York in the Fifties 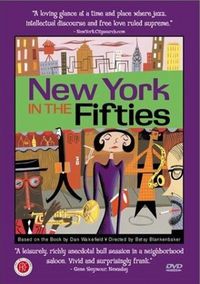 New York in the Fifties is the story of a unique time and place, when New York was the hotbed of new artistic expressions, free love, drinking, hot jazz, and radical politics.
The film combines stunning archival footage of New York with interviews and footage of icons of the day-Kerouac, Ginsberg, Baldwin, Mailer, Basie, etc. Offering modern day perspective and reminiscences are writers, actors, and artists such as Joan Didion, Robert Redford, Nat Hentoff, Gay and Nan Talese, John Gregory Dunne, William F. Buckley, and Calvin Trillin-all part of the rich cultural and artistic scene of the time. Based on the best-selling book by Dan Wakefield, the film also traces Wakefield's restless rebellion in conformist Indianapolis, and his escape to New York with dreams of writin ga novel, falling in love, meeting like-minded souls and questioning the meaning of life.