My Enemy, My Brother 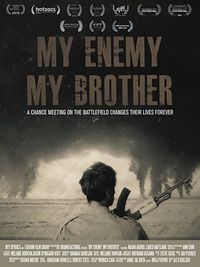 This is the real life story about two former enemies who become blood brothers for life: Zahed Haftlang was an Iranian boy who ran away from home to join the army. Najah Aboud was a 19-year old Iraqi who had been conscripted to fight in the war, leaving behind his wife and son. Both men fought in the Iran-Iraq war where Zahed finds Najah injured in a bunker and decides to risk his own life to save him. -

My enemy, my brother, the human traces of war

The eighties, during the war between Iraq and Iran. On one hand, the Iranian teenager Zahed Haftlang, only thirteen years old, is enrolled in his country's army to dig large graves where to bury enemy corpses. On the other, the nineteen-year-old Iraqi soldier, Najah Aboud survives the explosion of a missile that falls on his bunker, in the front line of battle. In My enemy, my brother, we will see the inevitable encounter between these two men, who will achieve, in the clashes of war, an unimaginable brotherhood.

In this short documentary, directed by Canadian filmmaker Ann Shin, there is a two-handed narrative told in the very voices of both ex-combatants, who make a trip to that warlike episode that marked their lives. The testimonies taken in interviews are illustrated by animated images of battles, an aesthetic resource that becomes a leitmotiv of the film to recreate in the present the most personal moments in the past of the characters

In a tenacious handling of the dosage of information, My enemy, my brother condenses a story that by its short length makes no use of dead times in order to gain a convenient forcefulness. Here is the anecdote what matters. It is a classic and effective narrative exercise to tell a memorable story about the most human causality that can be conceived by war.