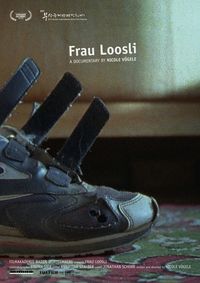 An intimate and minimalistic approach allows us to witness the daily routine of Mrs. Loosli in her home in the Swiss Mountains.

Mrs Loosli is old. Her husband died many years ago; her children have moved out. She spends her days alone on her farm at the foot hills of the Swiss Alps. Being alone is her ultimate life task.

Mrs Loosli knits. She keeps in shape on her treadmill. She listens to the radio. She fires up the oven and fetches Wood. She bakes an Apple pie for herself. She spends time with her dog.

A young film crew watches an old lady's everyday life and documents how each morning she braces herself against her life's loneliness and the absurdity of life.