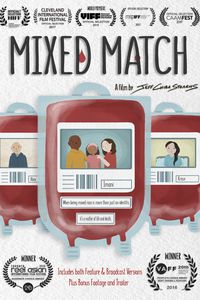 Mixed Match. When being mixed race is a matter of life and death

This documentary is an important human story told from the perspective of mixed race blood cancer patients who are forced to reflect on their multiracial identities and complex genetics as they struggle with an impossible search to find bone marrow donors, all while exploring what role race plays in medicine.

With the multiracial community becoming one of the fastest growing demographics in North America, being mixed race is no longer just about an identity, it can be a matter of life and death.