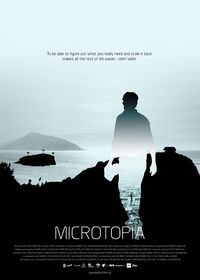 "Smaller is smarter" is the premise shared by the artists and activists consulted in this documentary that reveals groundbreaking projects that are changing the way in which humans inhabit nature.

The protagonists of this documentary believe that something is really wrong in the way humans have organized themselves to live on earth. By traveling around the world, director Jesper Wachtmeister builds a kaleidoscope of ecological experiments made by brilliant minds. Architects, artists and ordinary people follow exciting searches to find new and less polluting ways to coexist within our ecosystem.

A portable home, a floating garden made of recycled materials, a greenhouse in the middle of the arid geography of Texas or a camping tent with an intelligent, innovative design, are some of the experiences that are already giving results. Microtopia is an inescapable documentary for those who do not curb their imagination when it comes to envisioning a future where human beings and nature cease to be antagonists.