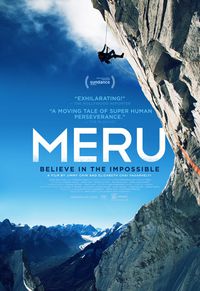 Meru is the electrifying story of three elite American climbers—Conrad Anker, Jimmy Chin, and Renan Ozturk—bent on achieving the impossible.

In the high-stakes game of big-wall climbing, the Shark’s Fin on Mount Meru may be the ultimate prize. Sitting at the headwaters of the sacred Ganges River in Northern India, the Shark’s Fin has seen more failed attempts by elite climbing teams over the past 30 years than any other ascent in the Himalayas.

The layout of the 21,000-foot mountain’s perversely stacked obstacles makes it both a nightmare and an irresistible calling for some of the world’s toughest climbers. Hauling over 200 pounds of gear up 4,000-feet of technical, snowy, mixed ice and rock climbing is actually the simple part of this endeavor. After crossing that gauntlet you reach the Shark’s Fin itself: 1,500 feet of smooth, nearly featureless granite. There are few pre-existing fissures, cracks or footwalls. It is simply a straight sheet of overhanging rock.

In October 2008, Conrad Anker, Jimmy Chin and Renan Ozturk arrived in India to tackle Meru. What was meant to be a seven-day trip with the equivalent amount of food became a 20-day odyssey in sub-zero temperatures, thanks to the setback of a massive storm that showered the mountain with at least 10 feet of snow. Like everyone before them, their journey was not a successful one. But they had reached further than anyone else, beaten back just 100 meters below the elusive summit.

Heartbroken and defeated, Anker, Chin and Ozturk returned to their everyday lives, swearing never to attempt the journey again. But they faced sudden physical and emotional challenges back home, too, challenges only exacerbated by the siren song of Meru, one that Anker perhaps heard the loudest. By September 2011, Anker had convinced his two lifelong friends to undertake the Shark’s Fin once more, under even more extraordinary circumstances than the first time around.

MERU is the story of that journey—one of friendship, sacrifice, hope and obsession.