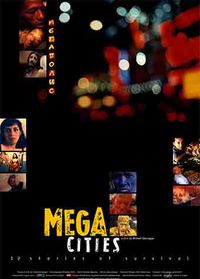 Megacities is a documentary about the slums of four different metropolitan cities: Bombay, Mexico City, Moscow and New York. The film is a tale in twelve episodes about people struggling to survive with resourcefulness, humor, and dignity.

What do the inhabitants of New York, Mumbai, Moscow and Mexico City have in common? Michael Glawogger takes us to the depths of the periphery of these huge urban centers to show us the lives of a series of unforgettable characters with his characteristic exotic aesthetic.

The portraits unite these territories with the most human marginality that arise from the intense metabolism of these megacities connected only through the antipodes of planet Earth.

In Megacities, Wolfgang Thaler's photography frames with psychedelia and crudeness the picturesque spaces of characters that resist the fierceness of the urban environment.

A fraudster addicted to heroin, a group of young people living in the sewers, a mother of three children working in a red district bar, a garbage man whose dream is to become a successful football player. They are some of the protagonists of this award-winning documentary.

With an episodic narrative composed of twelve chapters, a sober rhythm of montage and an irreverent mise en scene, Megacities is a trapping documentary from beginning to end.

The film is the first of a trilogy about the realities of the social margin at a planetary level. In his work, Michael Glawogger manages to dig into the soul of those who are displaced by the prevailing system and live hour after hour an endearing and hard struggle for the survival of both their bodies and their most desired dreams.