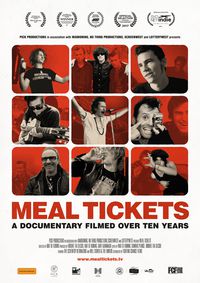 A dizzying film that documents ten years of the zigzagging career of the Australian rock band Screwtop Detonators.

Meal Tickets. Because there is no guide book to rock 'n' roll

Since director Mat de Koning began to document in film the beginnings of the Screwtop Detonators, a rock and roll quartet from Perth, there would be a series of impromptu and intuitive video images that follow the career of this band for over a period of ten years with all the ups and downs that the rock 'n' roll world can bring about.

Guided by manager Dave Kavanagh, the Screwtop Detonators soon face the fatigue and weaknesses of this harsh and competitive market, so they must decide whether or not to continue with their dream. Filmed in the fresh style of a behind the stage footage and combining colors and images in black and white, the film is a document about the Australian rock scene told by a band that fights to conquer it.