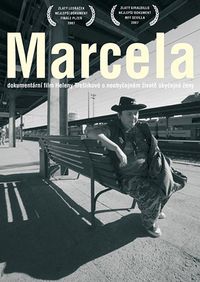 An ordinary Czech woman is explored throughout several decades of her life. Marcela married Jiří in 1980. She could not foresee that she would have problems with her flat and her mother-in-law, that she would give birth to a daughter and that, two years later, she would divorce. Unravelling before our eyes is the authentic story of an ordinary woman in an inadequate social environment and a less than satisfactory relationship. A big shock awaits her in November 2005 when her 25-year-old daughter Ivanka tragically dies.

Marcela, the biography of a smile

As part of a television series about the lives of several married couples in socialist Czechoslovakia, Director Helena Třeštíková covers 25 years in the life of Marcela. One of the first scenes of the film is the day of the marriage with her husband Jiri in the dawn of the 80's. By then, the jovial smile of a hopeful Marcela stands out in the black and white images. But little more than a year later, after conceiving a little girl, both separate. The divorce would only be the first obstacle of her life. From here on, the traits of a naive smile will evolve in front of us in a captivating story.

In what could be an unknown diamond of contemporary documentary, Marcela is to evoke the imperfect and crude documentary film tactics of the late sixties, where cameras and the sound recorders were lighter to follow the story of anonymous characters in the streets. But the life of Marcela, whom we see grow in age from the  twenty-something to her fifties, turns into a hardly navigable maze. The rules of two social systems experienced in  Czech territory become sterile in the face of the abasement of the individual by the inexplicable avatars of destiny. The raising of two children in a solitary maternity, her bad luck in the search for a new love and an endless search for a job are processes that Marcela faces head on high.

Leaving behind the black and white images of the eighties, the color of the digital era comes to show us Ivana and Tomás, Marcela's daughter and son. Later, there is an unexpected breakthrough: Marcela must face the death of one of her childs. The filming continues and Marcela remains under our eyes for a few more years during the biggest challenge of her life, to stay afloat after an incurable loss. The film extends itself to show the repercussions after a previous version of the film is broadcasted in national television. The money and letters of support that she receives from the audience and the harassment of a viewer that falls in love with her are some of the participations of the spectators in this story where the sense of life is presented to us under the scrutiny of an memorable existence.