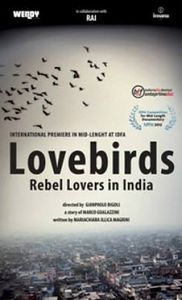 Lovebirds are young rebel lovers that risk their life just to stay together. They escape their families and persecution from India’s ancient tradition of prohibiting marriage outside one’s caste or religion. Different stories of Lovebirds on the run interweave in a poor shelter in New Delhi. There to help them is Mr. Sachdev who leads the Love Commandos, a group of Indian activists supporting their rebel choices.

The love for each other made Arti and Sanjai, a young married couple from New Delhi, leave behind their families and their people to become fugitive lovers. The reason for their scape is that both belong to different social castes: Arti is of Thakur origin and Sanjai is a Kashyap. This kind of marriage has been historically rejected in India because of its Caste system, a tradition that is defended even with violence in order to protect the family honor.

Italian director Gianpaolo Bigoli makes an admirable accompaniment over several years to a series of characters trapped in this spiral of forbidden love. The documentary gets its base in the shelter of The Love Commandos, a non-profit organization lead by Mr. Sachdev. The Love Commandos provides protection and legal counseling to the lovers, who usually feel persecuted and threatened by the defenders of tradition.

The case of 32-year-old Karunesh is particularly poignant. Having married furtively with the granddaughter of an influential New Delhi politician, Karunesh was separated from his wife by force and now he fights in the courts for the possibility of recovering her lover after four years of not seeing each other. Confronting the designs of tradition, watching Lovebirds awe become witnesses of the enormous strength of the most overwhelming instinct of the human being when it comes the time to love.