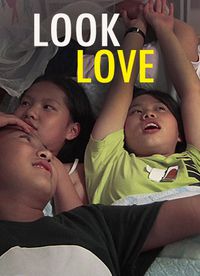 Two children who are a part of the 'left-behind' children phenomenon in China reveal what it's like to live with a shortage of love and an absence of family values.

Look Love, the two sides of orphanage in China

Two contrasting scenes of Look Love give us indications of inequality in today's China.

On the one hand, a mother who works in another country, like the father, prepares to enter her daughter in one of the best private schools in Beijing. There, a wall full of photographs of ex alumni, the vast majority of them accepted in the most renowned universities in the world, is the image of a guaranteed success.

On the other side of the social frontier, three children eat with their father in the candlelight because they lack electricity. It is New Year's Eve, but for them it is just one more night they spend without the care of a mother who has gone away to work.

Look Love follows the lives of Linsheng, a child who lives with his siblings deprived of parenting most of the time in the modest corner of a poor neighborhood; and Xinyuan, a girl from a wealthy Beijing family whose parents work in another city. The film, directed by Chinese director Yun Ye, is a two-side portrait of the same problem: the lack of love during the upbringing ​​in the midst of the economic conditions of a country that embraces capitalism.