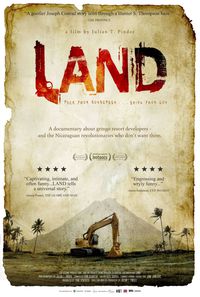 When Daniel Ortega returns to power in Nicaragua in 2006, a group of Americans see the lands they bought in the past threatened by the locals and a renewed air of revolution.

Land. The Wild West story of Gringos in Nicaragua

This documentary tells a true Wild West story, delving in to the tumultuous topic of land ownership and development in politically volatile Nicaragua.

The year is 2006, where Nicaragua is viewed as the new land of opportunity. Newspapers and magazines hail it as The New Cancun, The Next Florida. Fred, Sean and Keith, three naive Americans wide-eyed at the prospects of finally making it big, set up shop and start constructing resorts for tourists’ next discount tropical vacation.

What these inexperienced developers don't know is that the seemingly inexhaustible cheap manual labour is about to run out. The natives are restless and starting to see through this new form of imperialism.

When former revolutionary leader Daniel Ortega and the Sandinistas sweep back to power, legitimately or otherwise, not one of our Gringos is left unscathed.

National Film Board of Canada (NFB)