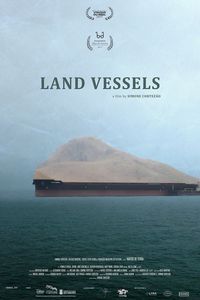 For many years, the mountain has been moved between two countries, Brazil and China. Romulo, an ex-mineworker, heads into his first journey taking part of the mountain towards another one.

Land Vessels. The man and the mountain crossing the pacific

A lyrical introduction tells the myth of a minimal man surrounded by the immensity of a giant statue, a scene that establishes the mythical tone of this profoundly real story about a Brazilian ex-miner who embarks on his first journey on a cargo ship that transport clay to Taiwan.

For many years the mountain has been moved between two countries - Brazil and China. In the immensity of the sea, Rómulo meets other travelers, and in feverish moments he finds the memories and spirit of the earth.