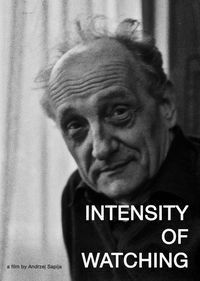 This documentary presents us the inspiring career of the Polish filmmaker Kazimierz Karabasz, the ideologist of the "patient eye", a contemplative way of looking at reality in its most transitory, apparently "insignificant" moments.

Intensity of Watching. The life of the Polish filmmaker Kazimierz Karabasz

"Cinema is a primitive art, basically every film is. It all depends on how intently you watch it" is the first revealing phrase that Kazimierz Karabasz, the renowned Polish documentary filmmaker, offers us in this film.

His name is associated with the creative concept of the „patient eye” – a documentary method of observing everyday reality of average people’s existence.Karabasz is hardly interested in portraying historical or political themes.

He rather focuses on transient moments of human existence – those particles
of time that often seem too obvious and banal to be worth filming.

The film ‘Intensity of Watching’ is a biography of Kazimierz Karabasz presenting his
artistic life from film school years up to his latest film.