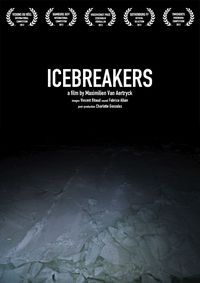 A ferry makes its way through the ice that floats somewhere in the Baltic Sea in the middle of a calm, dark night. Inside the boat, the passengers are part of an unusual musical.

Icebreakers, Dancing on the ice of the Baltic Sea

Outside, the black night looks placid and silent. We only hear the ice gently hitting the metal hull of a ferry that crosses the sea. But inside the boat the environment cannot be more different.

In this atmospheric approach to life inside a leisure ferry, we can only have a sketch of apparently happy characters as they dance in a cabaret, in the corridors that lead to the cabins and while they sing in the karaoke sessions in a bar on board.