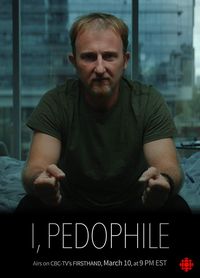 According to recent medical findings revealed in this documentary, pedophilia is a condition that is born with men and unlikely to cure. Based on testimonies of self-conscious pedophiles, this gripping film breaks taboos and unveils medical efforts to treat pedophilia on both sides of the Atlantic.

I, Pedophile. The taboo of being attracted to the impossible.

Recent scientific evidence seems to indicate that pedophilia is a condition with which one is born and little, or almost nothing, can be done to change it. The reality is that we live among people who, secretly, try to overcome their inevitable attraction to children, in many cases with a lot of emotional pain.

So, what is being done to treat this condition? This gripping film gives us access to the real testimonies of pedophiles that have sought help in the few medical programs that exist to treat pedophilia, such as the program led by Dr. James Cantor, in Canada, and the prevention Project Dunkefeld, in Germany.