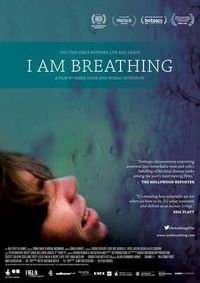 I AM BREATHING reminds us what it is to be alive – a tale of fun and laughs with a smattering of upset and devastation.

Within a year, Neil Platt goes from being a healthy 30-something British bloke with a great sense of humour to becoming completely paralysed from the neck down, thanks to the devastating illness he has inherited – known as ALS, MND, or Lou Gehrig's Disease. As his body gets weaker, his perspective on life changes.

Knowing he only has a few months left to live, and while he still has the ability to speak, Neil puts together a letter and memory box for his baby son Oscar and communicates his experience and thoughts about life in a blog – and in this film which he was determined to make.

I Am Breathing, a powerful essay on providing image and sound to the unavoidable threshold of life and death

Neil Platt knew that, according to genetics, he was likely to suffer from the same syndrome that killed his father ten years ago. Entering his thirties and feeling the worsening of the symptoms of the Motor Neuron Disease (MND), a neurological disorder that affects the motor functions of the body, he decided to leave trace of his presence in life. That is how I Am Breathing is born.

Premiered at the renowned IDFA, in I Am Breathing the camera turns it self into a cautious guest inside the walls of Neil´s house, where he lives with her wife and his two-year old son in the Scottish countryside. It is a temporal lodging in a big house set away from the city that evolves into a character in it self in the movie. The atmosphere is between tender intimacy and claustrophobia, as we become close observers of the quotidian moments in Neil´s life. For him being paralyzed from neck to feet is not an obstacle to share time with his family as he still can speak to communicate with others.

In Spite of remaining permanently laid on a special bed and remaining alive through artificial respiration, Neil uses software of speech recognition that allows him to write daily posts on “Platittude”, his personal blog. The idea of it is leaving his thoughts on life to his son Oscar and to raise awareness of the importance of financing research on the MND. These posts form the narrative thread of the film, written notes through which Neil tells his memories and impressions of life, like the joy of falling in love or the partying and motorcycle rides he once enjoyed with his friends.

In I Am Breathing, the directors Emma Davie and Morag McKinnon´s achievement is telling the last journey of a anonymous man leaving aside any element of grandiloquence. The film is a powerful essay on providing image and sound to the unavoidable threshold of life and death.