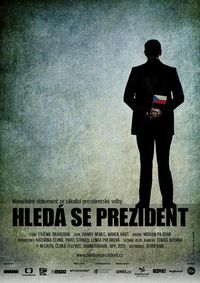 President Wanted shows the behind the scenes of the candidates running for the first direct presidential election in the Czech Republic from the summer 2012 to January 2013.

President Wanted, behind the veil of a presidential election.

Czech Republic during the year 2012. The country is preparing to celebrate the first direct election of its president, who after the fall of the Soviet Union was elected by parliament. In President Wanted director Tomas Kudrna manages to sneak into the interstices of the Czech political arena to show us the details of an event that will mark history in the recent European nation.

The film gives us a panorama without curtains to the different tactics deployed by the thirteen candidates in their struggle to gather adepts, making visible the anonymous beings that give life to the boiling electoral campaign. A woman hidden inside a bus that wander the streets of a town announcing a political program or a worried protocol agent cleaning a little drop on the rugged face of one of the candidates are some of the anecdotes seen in the film.

After the first round of elections, the fierceness of the fight for the first magistracy will only sharpen between the last two candidates: Milos Zeman, former Prime Minister and Karel Schwarzenberg, Minister of Foreign Affairs. President Wanted is a crude visit to the theater of politics, an arena that has more of animal instinct than diplomacy.