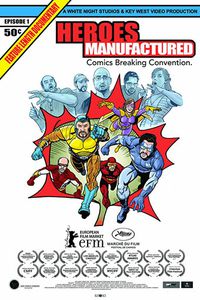 The Toronto COMICON makes the perfect occasion for director Yaron Betan to present us a kaleidoscopic look at the talented and innovative community of Canadian comic artists.

Heroes Manufactured, The Canadian minds behind the world of comics

Each month of March and for three days in a row, Toronto is home to one of the greatest Comic events in the world. And if we add that Canada is the birthplace of some of the the brightest minds in the industry, the event takes on a special character.

In this film, the idea of ​​"Made in Canada" permeates a friendly narrative rich in interviews with icons such as TV Templeton, cartoonist and writer of Spiderman, Batman and The Simpsons, the comic book; Richard Comely, creator of Captain Canuck and more.

In addition to the presentation of consecrated and new artists from the industry, the documentary makes an important approach to those Canadian independent artists and companies that face the challenge of breaking into the vibrant international market.

Without unnecessary patriotism or odious bragging, Heroes Manufactured raises awareness about the importance of the northern country in the past, present and future of the comic art in all its dimensions.