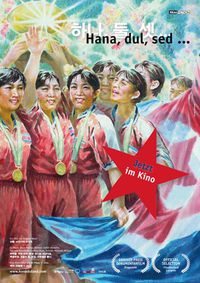 Ri Jong Hi, Ra Mi Ae, Jin Pyol Hi and Ri Hyang Ok are members of the national women's football team of North Korea, one of the best worldwide. The largely unknown life in the hermit communist state - from it's showcase monuments to its everyday locations - is caught in an offhand way as the camera follows the lives and careers of these four young women.

To this day, North Korea remains one of the most hermetic nations to the rest of the world, which knows very little about the daily life of those who live in the socialist country due to its tight control over international access to its territory.

But in addition to the news about its atomic bomb and the huge military parades in honor of its great leader, the country is also known in the world of football for its successful women’s team, which has been the world champion on several occasions.

Hana, Dul, Sed is a must-see inside look behind the North Korean curtain to discover the dreams and longings of four young female footballers in a isolated nation.

Austrian director Briggite Weich walks the streets of Pyonjang taking as characters of the desolate and quiet background our four protagonists, who are already retired from the fields and revive in emotional interviews the key moments in the history of the national football women's team.

From the first stumbling blocks in the elimination round for the World Cup to the conquest of the most precious final game. Viewed as heroines by her compatriots, their work and those of her other companions is seen in the socialist country as a patriotic act, so they often have state privileges as a larger ration of food subsidized by the government.

With strong restrictions to shoot in North Korean territory, such as the omnipresent supervision of a state security officer assigned especially for the shooting, Weich manages to establish the subtle choral portrayal of four young heroines in an environment that inevitably demands a political reading about a society under a very particular system.

Among the images of the immense golden bust of the eternal president, the billboards that advertise communism with a catchy slogan or an eternal staircase of clean concrete, the testimonies of our protagonists are drops of humanity that fall on the homogeneity and the monotony of this inaccessible territory.