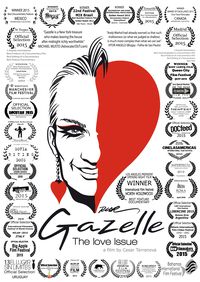 A portrait of Paulo, a flight attendant who in the after-hours world is internationally known for personifying Gazelle, an extravagant character dressed in carefully crafted attires whose presence fills the clubs where she appears with art and sensuality.

Described as a "magical creature of the night", Gazelle dazzle with its tropical chemistry and delicate costumes the clubs of the gay and trans community of London, New York and Sao Paulo. Created by Paulo, a Brazilian flight attendant, Gazelle has become more than an artistic alter ego, but a memorable character.

But being Gazelle is not an easy task. In this documentary we navigate the two lives of Paulo, who must face the tragic death of Eric, his companion for 7 years, and the consequences of AIDS, a situation that puts his life in danger more than ever before.

Pushed to begin a necessary transformation that allows him to move on with his life, Gazelle becomes a fertile ground to express his deepest emotions and dreams.