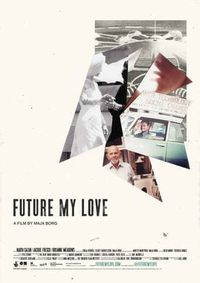 At the brink of losing the idealistic love of her life, filmmaker Maja Borg takes us on a poetic road trip through the financial collapse, exploring a radically different economic and social model proposed by 95-year-old futurist Jacque Fresco.

Future my love, looking for love in futurism

In Future my love, Jacques Fresco, our protagonist, admits that his only fear is to be around too common people. The documentary is an audacious essay filmed from the intimacy of the ideas of a director who interviews the man who proposes to build a “Second Eden” on earth. According to him, this new version of the original biblical garden would foster an ideal society on the planet and everything would be possible thanks to the implementation of his lifelong project: the socio-cyber-engineering.

The narrative is based on an interview that the director Maja Borg has with Fresco in Miami, during her stay in the prototype of the ideal habitat that he, his wife and other collaborators built in Miami, United States called Venus Project. This lodging of which we seem to be part as spectators happens in a White and aerodynamic house, with an infinitely curved ceiling. Inside, Jacques Fresco tells us in detail — while constructing futuristic models — the theory about his perfect civilization, one in which machines would regulate social phenomena, which would free the human being from the slavery of work and the problems that afflict it .

For his part, Borg advances as a character in this story as a fish in a gaseous and unassailable aquarium, just as Fresco's imagery, in her desire to find an endearing sense in the immensity of the new, perfect and fertile imaginary of the genius that she auscultates. Among the interesting ramblings about life in society, economics and world wars, Fresco gives us a clue about the case: “In the future, love will be universal. We will not only love just one person, because there are so many kind people who can be loved that loving just one will be insufficient. “ The invitation to his world has been made to us.