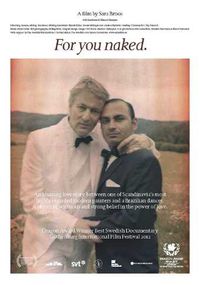 After a complicated period of pushing back waves of anxiety by overindulging in alcohol and pills Swedish painter Lars Lerin focuses on finding the love of his life. Via the internet he becomes intrigued by a young Brazilian dancer named Manoel, who flies to Sweden to see him.

For you naked, together pursuing happiness

A Swedish and a Brazilian man try to fall in love in Scandinavia. The first is Lars Lerin, a painter whose palette dominates the cold colors of Viking lands. The later is Junior, but his star name is Manoel, a latin dancer. After years of alcoholism and love failures due to his social phobia, in For you naked we follow the emotional record of Lerin’s attempt to achieve a distant happiness.

Swedish director Sara Broos films the incommunication of two different worlds through the relationship of these picturesque lovers. With the license of being Lerin´s goddaughter, the daily moments that Broos captures with his camera are complemented by the close confessions of an insecure Lerin, who unveils his emotions as he develops his coexistence with Junior.

The sale of a dog that was theirs for a day, the cover of a Swedish — Portuguese dictionary, a skiing session in the afternoon and an eventual trip to Brazil are just some postcards of this particular love story that we see as it grows in unpredictable terms in its ups and downs.

With this particular relationship between two lovers who are diametrically different in terms of geography, the film succeeds in presenting the challenge of human capacity to correspond with dignity to their social needs and as well as the issue of consanguinity between two individuals faced with the limitations of cultures.