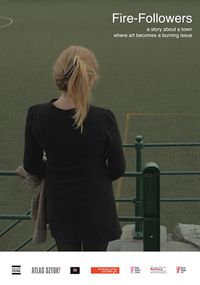 In this hysterical deadpan pseudo-doc, acclaimed Polish artist Karolina Bregula constructs a scenario in a fictional Northern European city plagued by mysterious fires throughout its history. As the towns peculiar inhabitants speculate about the cause of the fires, the way they may be prevented and the strange coincidence of where they occur, a possible conspiracy to destroy local art begins to emerge. Are the fires caused by a secret cabal of art historians who wish to aid local artists by eviscerating the burden of art history? Have the needs of the art market placed infinite demands upon the finite resources of artists? Fires, a botanist tells us, are vital to maintaining fully dynamic ecosystems. Without fires there simply is no new life.

Fire Followers, fire or art: the dilemma of a wooden city

A dilemma hovers on every corner of a wooden city. Having lost much of its artistic legacy in fires that have occurred over several centuries, the value of culture and its preservation is not a closed discussion among its inhabitants.

With this pseudo documentary, full of curious characters that take their beliefs to the extreme, artist Karolina Bregula makes us question about the importance of the materiality of art.

Using fire as a metaphor for the destruction necessary for a new genesis, the film manages to revive our capacity of amazement before institutions that we thought benevolent, such as art museums and galleries.

If everything in nature is putrefaction, is art really the vehicle for the eternity of humankind?