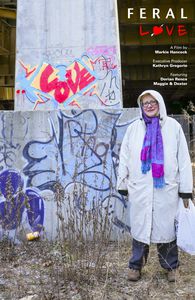 This documentary makes the curious portrait of Dorian, a prominent musician that has a feral cat colony in the tunnels of New York City.

Dorian was the 7th woman to join The New York Philharmonic and in her 40-year career she has played with all the greats: Leonard Bernstein, Pierre Boulez, Zubin Mehta and Yo Yo Ma to name a few.

She also cares for a feral cat colony in the tunnels of New York City.