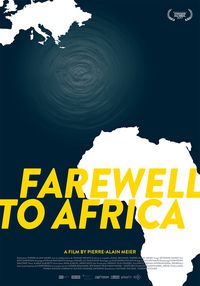 Filmmaker Pierre-Alain Meier travels to Senegal in the hope of understanding the story behind the shipwreck of a 30-year old European woman and a dozen black migrants in 2009.

Farewell To Africa, Looking at our skin colors in Senegal

In 2009 the body of Alice B is found washed up on an African beach. Next to the corpse of the white, 30-year old European woman lie those of a dozen black migrants. Eight years after this tragedy, Pierre-Alain Meier travels to Senegal in the hope of understanding the story behind this tragic shipwreck.

When he was Alice’s age, he wandered the streets of Dakar planning the production of the film Hyenas. Like her, he was a white person in Africa. Perhaps like her, he hoped he could blend in more easily with his African friends and coworkers and not be so unmistakeably foreign.

Following in Alice’s footsteps, the filmmaker today puts his own story into perspective, with humility and affection, allowing us access to a very intimate terrain. Farewell to Africa tells the story of a final journey and sets out to explore the complex ties – both rich and asymmetrical - that have never ceased to exist between Europe and French-speaking Africa.