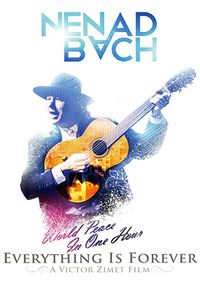 Considered a rock star in his native Croatia, Nenad Bach moves to the United States with almost nothing in his pockets, only with a guitar and a dream: that his music be known in the country of opportunities. Several years after that arrival, the singer-songwriter still has many challenges to face.

Everything Is Forever, A Croatian rock star in the United States

When Nenad Bach set foot in the United States for the first time, Bruce Springsteen played on the speakers of the JFK airport in New York with his song "Born In The US". That chance was almost an ironic gesture, to which the Croatian singer responded by composing "Not Born in The US", one of his first pieces inspired by his experiences on American soil.

The previous fact gives clues about the irreverent personality of Bach, always recognizable by his black hat and disheveled silver hair. From the very beginning of this musical documentary we get to know personal anecdotes as picturesque as his several photographs with famous Americans, such as Bill ClintoN, Whoopi Goldberg and many more.

But despite having such temporary company in those pictures, his songs are still unknown for most of the American public. His own son Ivo sent one of his songs to a local radio so that his music is at least heard here and there. The pieces and live performances of this dreamer are, of course, materials that contribute to a friendly narrative that, in the end, points towards the unfinished business of the artist.