Do You Believe In Love 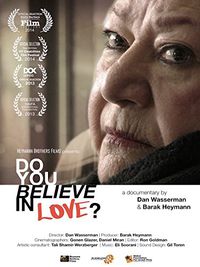 Tova does not believe in love but exercises her matchmaker job with an admirable passion. Diagnosed with muscular dystrophy, a disease that has left her with paralysis, Tova is a specialist in finding matches for people with disabilities.

Do You Believe in Love, A cupid for people with disabilities

Tova sits in her usual padded chair as she receives the endless customers who visit her in search of a precious clue to find their other half. After some exploratory questions, Tova resorts to a thick book of names where the ideal couple could be found, a registry that has been filled after several years of hard work.

But that of Tova's goes beyond being a normal occupation, but a passion in itself. Her crude and direct language, full of honesty and harsh humor, hides a sensibility of a natural born cupid. Being paralytic due to a muscular dystrophy and not believing in love does not seem to be problems for her. She analyzes every possible match and monitors each couple personally; most of them couples of people with disabilities.

Do You Believe In love breaks the veil of invisibility on the dating world of people with disabilities. The documentary manages to transmit a latent humanity in the daily observations of a blind woman or a young man in a wheelchair, both in search of a person they can love despite their physical obstacles.